Completely Off Topic - a day at the safari 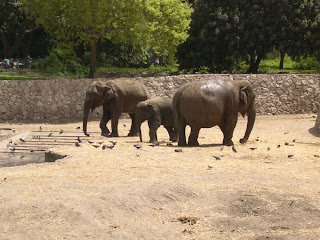 I don't usually post about anything that is not somehow related to my beadwork or beading in general, but I'm braking the rules today.
This week is Pesach (Passover), all schools and government offices are closed. Most other businesses are running at a very minimum with reduced hours. The country is, if not actually on holiday, running under this feeling of relaxation and fun... that is until you are unfortunate enough to hit one of the main roads where you realise that it is no fun to have to deal with irate Israeli drivers and traffic. Luckily we left relatively early this morning, although my sister was about half an hour late :-) so we missed the worse of it. My sister and I had planned to take the kids, or at least most of them (one of them is a football crazy kid, 14, and missed a trip to the safari for football practice, in his defence, he really wanted to come, but cannot miss practice, and i'm sure one day we will see him playing professionally).
My son and I had so much fun there!!! we walked 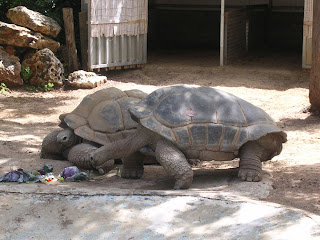 around in the blazing heat for hours!!! I love the safari park.... it always amazes me that it exists right in the middle of one of our concrete, quite industrialized cities. If you ever come this way, you should definitely pay a visit. I'm not really into zoos and caged animals, but this is different, they have conservation projects, breeding projects educational projects, I'm a huge fan... you can read more about the work they do on: http://www.safari.co.il/content.php?id=3 (sadly the english pages are too few, but you can get an idea)
So armed with lots of water, some cucumbers, apples (for us not the animals) and 4 kids we braved Israeli society and joined the crowds... and survived!!! :-) I say survived, because although I have lived here for about 18 years, I tend to keep to myself as I really don't like crowds... but venture we did, and here are some of the things we witnessed today that really drive me nuts:
Feeding the animals when there are signs everywhere asking not to do so!!!! why do people think they know better than the carers of these beautiful animals????
Arguing with the carer when told not to feed the animals!!! because of course they (the public) know better!!! :-) they probably have a pet snail at home or something so they must be expert!!! :-) but by far my favourite aggravation is watching idiotic parents hanging their children (usually under the age of 2) from their car windows to get them close to: ostriches, rhinos, and whichever other animal happens to cross their paths!!! what planet do these people live on??? do they think that the signs saying don't open your windows are there just for fun?!?!? having said that, none of it is as bad as watching some of these people entering the lion enclosure with their kids hanging from sunroofs and windows... again what planet are they on???
so once you get past the culture shock and you try to stop wondering which species actually belongs in the cages/enclosures, the rest is just a lot of fun.... but my advise, especially if you are not a native... is avoid high holidays at all cost!!!! :-)
here are some more picts of our wonderful day!!! 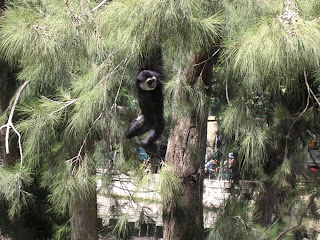 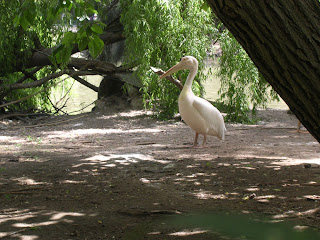 can you believe this is in the middle of Ramat Gan!!! 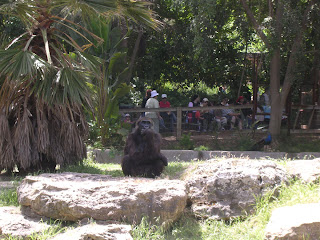 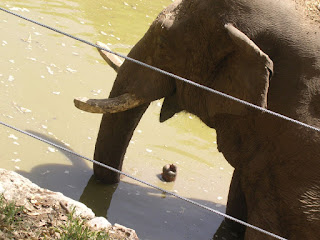 who is in the enclosure? who actually belongs there? :-) 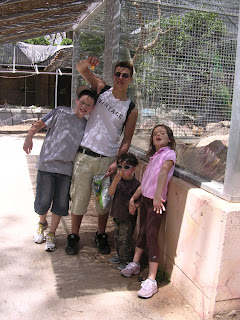 The smallest one is my little monkey :-) the other 3 are my sister's 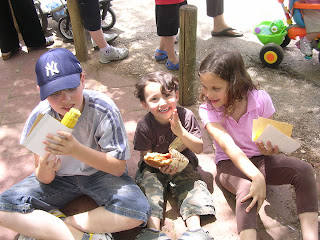 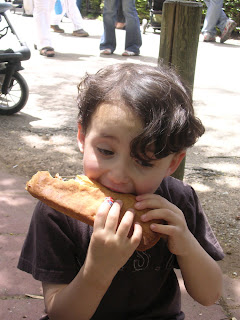 feeding time at the zoo :-)
and jus in case my dad sees this... it's not real bread, it's kosher for pesach bread... I can't even tell you if it tastes like bread, because I didn't even want to try it... it had the texture of plastic, but he loved it!!! which is just as well because he hasn't eaten anything but matza in the last few days.... 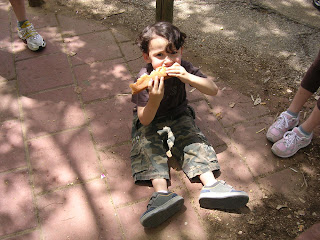 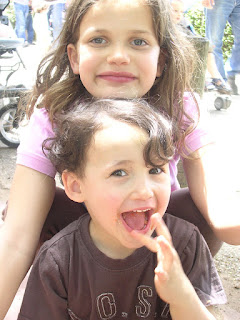 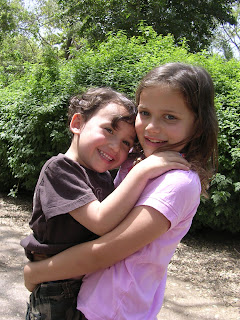 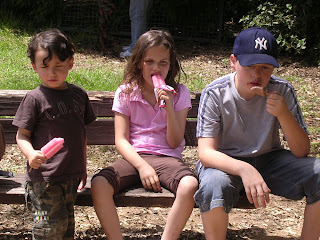