a few of my favourites….

I know I promised to show you the other fused glass pieces… but the pictures came out really dreadful… and the light hasn’t been good enough to take more… so instead I’m going to show some of my favourites beadwork pieces that I found lately created by some of the bao and ebw team members.

Cat Prints on a Lime Green Quilt by Time2cre8

The Barn Owl by SedonaSky

I could go on forever!!! so much amazing talent in both the ebw and bao!!!! these are just a handful… make sure you click on the links and check these amazing beadwork artists out!!!

As for me… I will retake the photos and will post them as soon as possible…. in the mean time, check out my BAO item of the week:

Remember my post a couple of weeks ago about my new adventures in glass fusing?

Well, here is the first beadwork creations made around my first successful fused glass cabochon!!!! 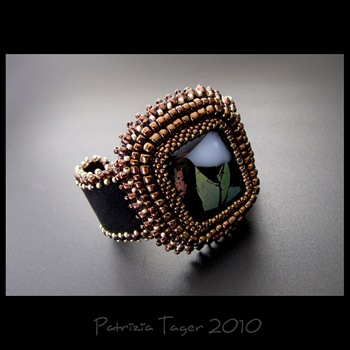 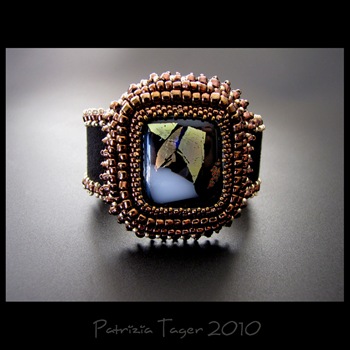 I’m so proud of myself!!!! especially as I managed to make it without blowing up my whole kitchen!!! :-)

You have to come back and see the next 2 cabs I made which I used for a necklace and bracelet set! They turned out pretty cool!!!Hopefully I’ll be able to upload them by Sunday….

I also wanted to share a link I was sent today by Cynthia of Beady Girl. She wrote to me a couple of weeks ago asking for permission to use my design idea for these leather/ultrasuede cuffs to teach in one of her classes… of course I said yes :-) so check out her blog and see the beautiful cuff she made!!!
http://beadygirl.blogspot.com/2010/02/inspiration-from-triz-designs.html

Ok… so I really love making these leather cuffs!!!! and I just can’t seem to stop! :-) but why should I? I absolutely love them!

Once again, I hid from the world and beaded up a storm!!!

I made 4 cuffs, 2 necklaces (including the next entry for the EBW March challenge) and a pair of earrings!!!! 2 of the cuffs and 1 necklace using my first reasonably-turned out fused glass cabochons (see previous post)

I’m still working on most of the photos… but here are the first 2 cuffs: 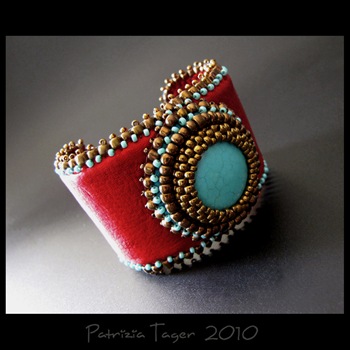 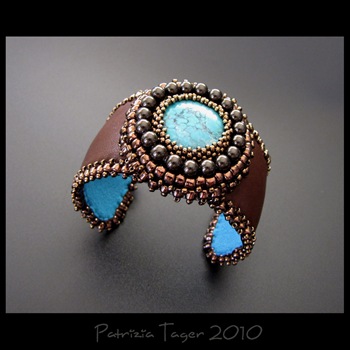 I absolutely LOVE both of them… and am actually thinking whether or not I should keep the brown one for myself! :-) I’ve got too much jewellery already!!! (if that is even possible) :-)

As soon as I get a chance I’ll start posting the rest of the pieces… but for today…. I’m afraid the day has already gone, and in another half hour I have to go pick up my little monkey from school…. so till the next time… happy beading! :-)

I haven’t entered an EBW challenge for a while, but this time I couldn't resist one of my favourites themes – Ocean/Sea + as I had 2 months (instead of 1) to complete my piece, I had absolutely no excuse not to enter.

My entry for the challenge is # 12, the Sea Urchin Cuff created around one of Helen Breil’s beautiful polymer cabochons. 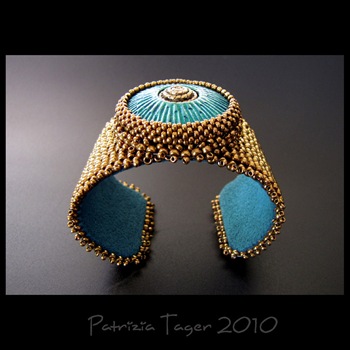 There are 46 entries for this challenge!!!! yes 46!!!! I have so many favourites that picking just one will be almost impossible!!!

Voting has started, so please head on over the EBW blog and vote for your favourite!!!! Voting ends on the 15th February so don’t put it off!!!!

As I mentioned a couple of weeks ago, I had this crazy idea that I wanted to somehow fuse glass… anyone who knows me pretty well, knows that I often go off into these crazy ideas and before you know it I have bought all the equipment necessary (and a few dozen books) in order for me to try “something new” out!  Some of the things I tried in the past are: photography (I still have my black and white darkroom set up amongst all my son’s toys), pottery, fabric silk screen printing, fashion design (actually got a degree in this),  law, politics (managed to get a diploma in Social Policy and Criminal Justice – very useful :-D), beading (at least this one stuck),  polymer clay (I have a huge box of unused Fimo and a pasta machine),  etc…. and so it was to no surprise to any of my friends when I announced that I wanted to melt glass at extremely high temperatures. :-)

So I started researching on the net… and asked a few people for advice…  and finally decided that a “proper” kiln was a bit too much money (kilns start at around $500 and go up into the thousands) to spend on a new endeavour  that I had no idea whether I would like or not…. so I opted for a Microwave-kiln.    I bought the kit, first because it was the same price as buying the kiln on its own, second because as I’ve never done this type of thing before I had no idea what I needed to get me started. 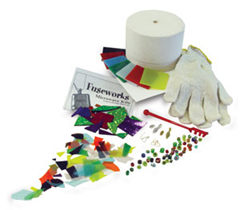 Well I finally got my kit yesterday… and was extremely eager to start!!!!

My first attempt was a joke :-) I stupidly thought that glass would be transparent so I sandwiched a piece of dichroic glass in between 2 blue ones…  see below… that little black thing in between is the hidden dichro… 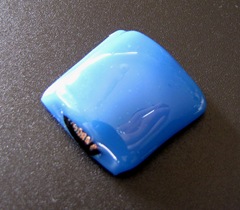 the second attempt, although I managed not to bury the detail, looks like… well… like someone had too much to drink and brought last night’s party back up :-) 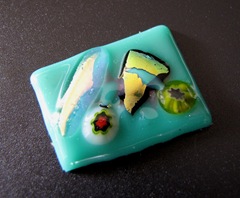 and the third one…. well…. at least heading in the right direction… 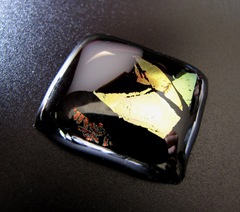 ….still not a great thing of beauty… but at least it doesn’t look like something you bring up after a bad night of drinking! :-)

So here is what I have to say about the microwave kiln:

It’s fun and quick and definitely recommend it if you just want to try it out and make really small pieces of fused glass (max 1 1/4”), which is limiting, especially for me, as I like working on a larger scale.

If you buy the kit make sure you buy a separate selection of glass and dichro because the selection that comes in the box is pretty naff!!! and make sure you buy some clear glass (I assumed it would come in the kit but it didn’t) because I think that is the trick to finishing off the piece making it look a bit less “crafty” and a lot more professional.  Also,  make sure you buy some extra kiln paper (which I did), because the kit only comes with enough paper to probably make about seven or eight 1” squared cabs… and I promise you they will be used up within the first 2 days!

I’ve only been using it for a couple of days now and I’m glad I got it but it’s given me a taste for wanting more and wanting to make bigger pieces…. so here we go, I have to start saving up for a kiln!!!  but until I managed to save up the money for it, this will do me fine and will let me experiment (with limitations) a bit!

Still hiding in my bedroom from the world…. and of course beading… I hide to bead… and my bedroom had become my favourite place to bead… so yesterday I came to the realization that I’m really comfortable and happy in there and rather than have boxes and boxed of beads all over my bedroom floor I should find a solution… and I did… I got one of those metal trolleys (I used to keep my TV and video tapes on it), and I proceeded to fill all 3 shelves with all my beads and equipment that was spread all over my floors… this way I don’t have to feel guilty if I like beading in my bedroom, because now the beads have found their own place in there without driving me nuts! :-)

So another week locked up in my bedroom… and the result is lots and lots of new pieces… I got so into the beading that I couldn’t even tear myself away for a few minutes to take photos nor to list and blog about the 2 pieces I did mange to photograph…. but I finally had to take a breather so decided to start posting some of the pieces, and here are 2: 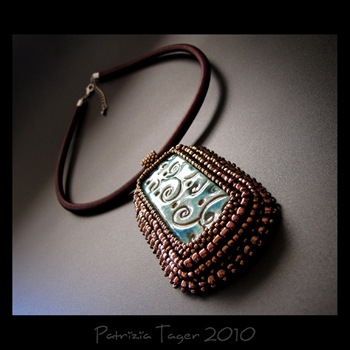 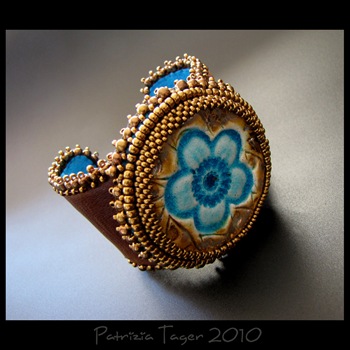 Both were created around Lisa Peters Art gorgeous ceramic cabochons… I just absolutely love using these… each one is different, unique and beautiful and I love combining them with the leather. Stay tuned, I have one more piece I created with Lisa’s cab as well as another leather cuff using turquoise stone and in a very bright leather… will post hopefully in the next few days… wishing everyone happy beading! :-)