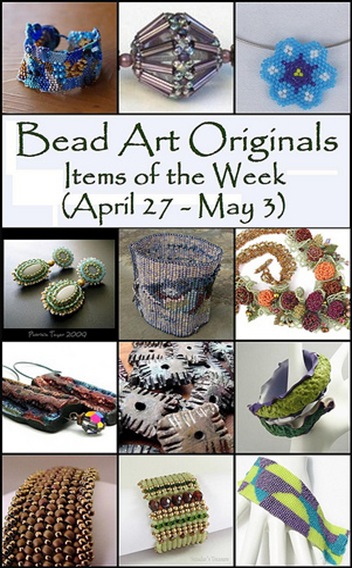 Here are this week’s gorgeous BAO items of the week! Each one with a special attached to them, so please visit the Bead Art Originals’ blog to find out what those special are!!!

My item of the week is the Celeste Earrings: 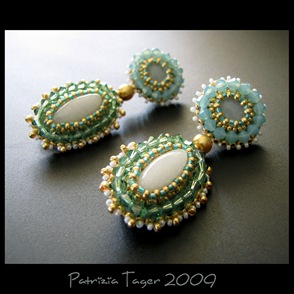 Purchase and pay for these earrings between now and 3rd May and receive 10% off + free shipping.

You must check this out!!! 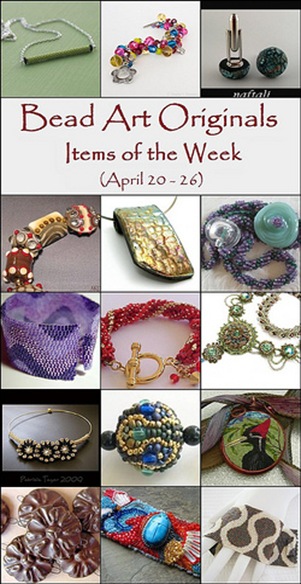 Here they are 15 gorgeous BAO items for this week!  Each one with a special attached to them, so please visit the Bead Art Originals’ blog to find out what those special are!!!

My item of the week is the Black Chic Choker:

Purchase and pay for this item between now and 26th April and receive 5% off + free shipping.

I can’t write a post today without mentioning Holocaust day… and after yesterday’s disgusting display by Ahmadinejad (or Ahmahitlerjad as I’ve become accustomed to calling him) at the UN's World Conference Against Racism… now that’s a joke!!! the UN + Ahmahitlerjad   against racism???  Allowing a very public racist and human rights violator to talk at such a conference just shows how legitimate the UN is as an organization… I’m sure if Hitler was alive today he would have been invited to speak too!!! disgusting!!! he has a right to dislike Israel if that is what he wishes to do, but what he does not have a right to do is to call for its destruction and re-write history by denying the Holocaust ever happened and that 6,000,000 Jews (over 1,000,000 of them children!!!!) were murdered by the Nazis!!!!  It was good to see a few dozen people stand up and leave the conference in the middle of the speech, of course am not sure why they were there in the first place… but to see those that stayed… and to see their approval and praise for the speech of this so-called man and all the hatred he has for so many (not just Jews and Israel)… now that offends my sensibilities… as a Jew, as an Israeli, as a woman but most of all a human being!!!!!!!!!!!!!!!!!!!!!

Please remember and please make sure you teach your children the true version of history not Ahmahitlerjad’s distorted version fabricated to advance his own agenda.  The Holocaust did happen – thanks to the Nazi's meticulous record-keeping we have proof that it happened (if you are not willing to believe the account of the survivors)… by denying it you are allowing history to repeat itself and next time you may find yourself in the group of people being demonized. Don’t let this madman win!!!!

I was asked to design a piece around these beautiful gold metal cabochons for my next bead-embroidery workshop that I will be giving in the next couple of months at Bogal’s (one of my favourite bead suppliers)…. and as the workshop is held at their place, I also wanted to use beads that I know can be found there (as they will be making the kits for the workshop)… so I chose to use ‘baby pillows’ which are actually one of my favourite beads to use for bead embroidery, because they are rectangular, flat and when sewn one next to the other they give this nice shimmering effect… I love them! :-)

So here is what I came up with: Black Sun Necklace

And this is how it looks when worn – I love how the fringe hangs!!!!

I will be designing a smaller version of this piece for the workshop itself and will be making it in silver and maybe some colour variations.

Was thinking of making this into my first tutorial and kit to be offered after the workshops are over… what do you think?

In the mean time, don’t forget the BAO’s Spring Sale is on (see previous post for SALE details) and today there will be another giveaway!!!!

Go check it out by clicking on the BAO banner on the left.

The Bead Art Originals are having a SALE!!!!! and if that wasn’t enough they are giving away an item every day this week!!!! To see the participating members and find out what specials are being offered between 12th – 18th April, visit the BAO Blog!!!! Also check out the giveaways – follow the instructions on the blog to participate in the giveaway – every day a new item!!!!

I am also participating in this sale and am offering FREE shipping to anywhere in the world on all my items in my shop during the period of the Spring Sale (April 12-18). In Addition am offering a 10% refund when you mention "BAO Welcomes Spring" in the notes to seller!

Don’t forget to check out the BAO Blog daily for your chance to enter that day’s giveaway!!! http://beadartoriginals.blogspot.com/

I didn’t manage to get anything finished (or even started, for that matter) for this challenge… and not for lack of inspiration… simply lack of time…. However, the EtsyBeadWeavers managed beautifully and 31 pieces were entered for this month’s Time Machine Challenge….

Now it’s your turn to go and check them all out and vote for your favourite!!! Be warned… not an easy task…I’m still debating between 6 of them! :-)

You have till 15th of April to vote! don’t put it off! The winner gets to pick a future challenge! :-)  http://etsy-beadweavers.blogspot.com/

It feels like ages since I posted anything new... and am happy to finally do so!!! This cuff was so much fun to make and at the same time took forever!!!!  The main part  was ready weeks ago, and I was about 3 hours away from the end.... I had a complete mental block towards it and refused to finish it!... probably because I wasn't 100% happy with it.... it's the over-achiever-perfectionist-nutcase in me :-)  Now that it's finished, finally, I do LOVE it!!! I really love the colours! I used lots of shades of grays and bronze, accented with dark purple Swarovski pearls and light gray fresh-water pearls.... full of sparkle!!!   What can I say... I just love bead-embroidery!!!! and am now going to hide in my bedroom and start something new!!!

To see more information on this cuff click on: Stepping Stones Cuff or the photo.

Tonight is Seder night (1st night Passover) - I will be spending it with my sister and her family... am looking forward to it!  although am sure I will be regretting the over-eating which tends to happen at every Jewish gathering... it's a curse... almost like all sense of reality and what is right escapes you, and you are no longer able to understand when you are satiated and full.... so you eat more... and more... and more!!! :-) I'm full already just thinking of it!!! :-)

Hoping to survive a ridiculous amount of food :-) and wishing everyone a happy Passover!!! 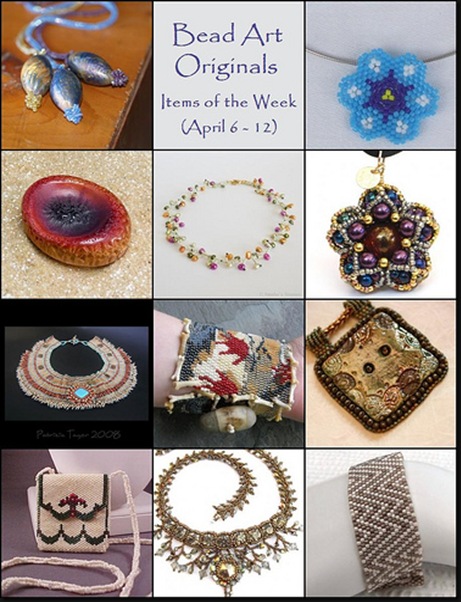 Here are this week's Bead Art Originals Items of the Week.

My item this week is the Let My People Go - Collar.  I chose this piece for this week because Wednesday marks the 1st day of Pesach (Passover) and this piece was inspired by that story.

Pesach commemorates the departure of the nation of Israel from Egypt. It marks the birth of the Jewish people as a nation led by Moses over 3000 years ago.  It is as much a celebration of our spiritual freedom as it is the physical liberation from slavery.

I was born on the 7th day of Passover, because of this my parents gave me the middle name Miriam (sister of Moses). I’ve always felt a strong connection to the history of this festival. The Jewish people spent over 200 years in Egypt and this piece is inspired by the jewellery and colours of those times.

This piece was created and won the EtsyBeadWeavers' November Ancestral Expressions Challenge.

Purchase and pay for this piece between now and the 12th April and receive 5% off + free shipping to anywhere in the world!

Visit the BAO Blog and see all these beautiful items and the special offers attached to them. http://beadartoriginals.blogspot.com/

Wishing everyone a happy Pesach!!!!